FIG artist Terrilyn Quick's Uterus Flag Project is currently on view on the 3rd floor of the Kellogg Library at California State University, San Marcos, through May 20. 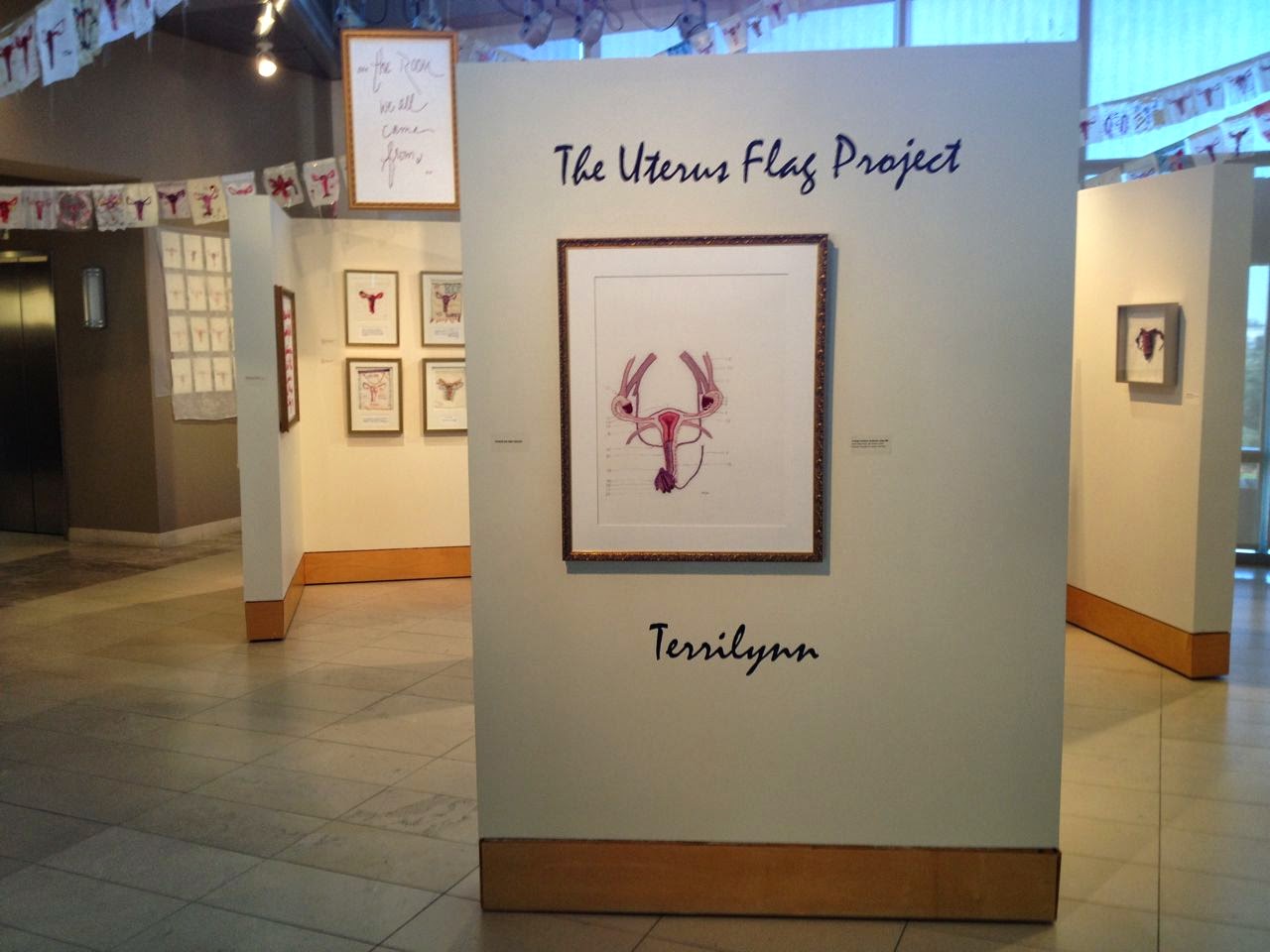 Integrating the power of art and the ideals of feminism, The Uterus Flag Project highlights craftivism as an alternative way of giving voice to social justice. The installation is the result of a collaborative social-practice art project, empowering participants to work with fiber arts to alter consciousness about women’s health concerns. 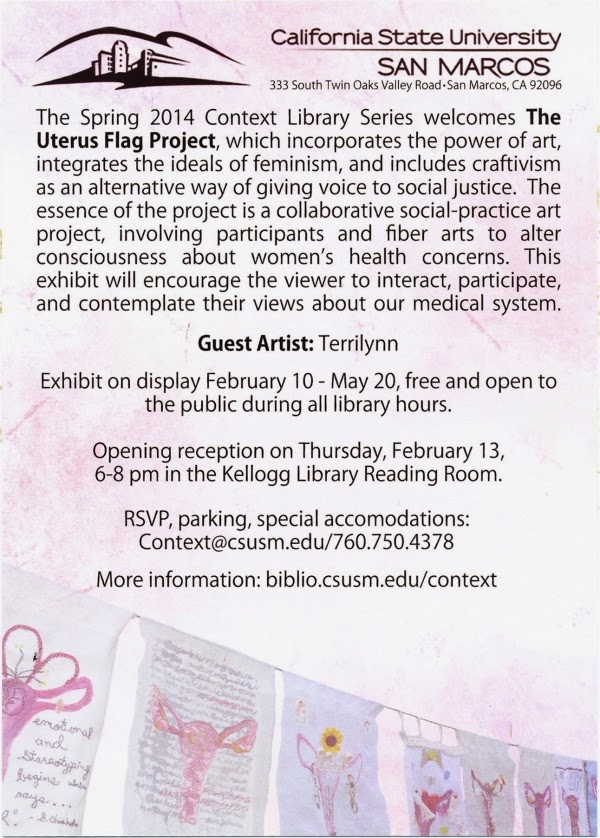 The Uterus Flag Project encourages the viewer to interact, participate, and contemplate their views about our medical system. If you are interested in participating in the project, there is more information on Terrilyn's blog.

Several FIG artists are participating in the exhibit Labor-Migrant-Gulf at Southwestern College in Chula Vista, California, which closes April 10. 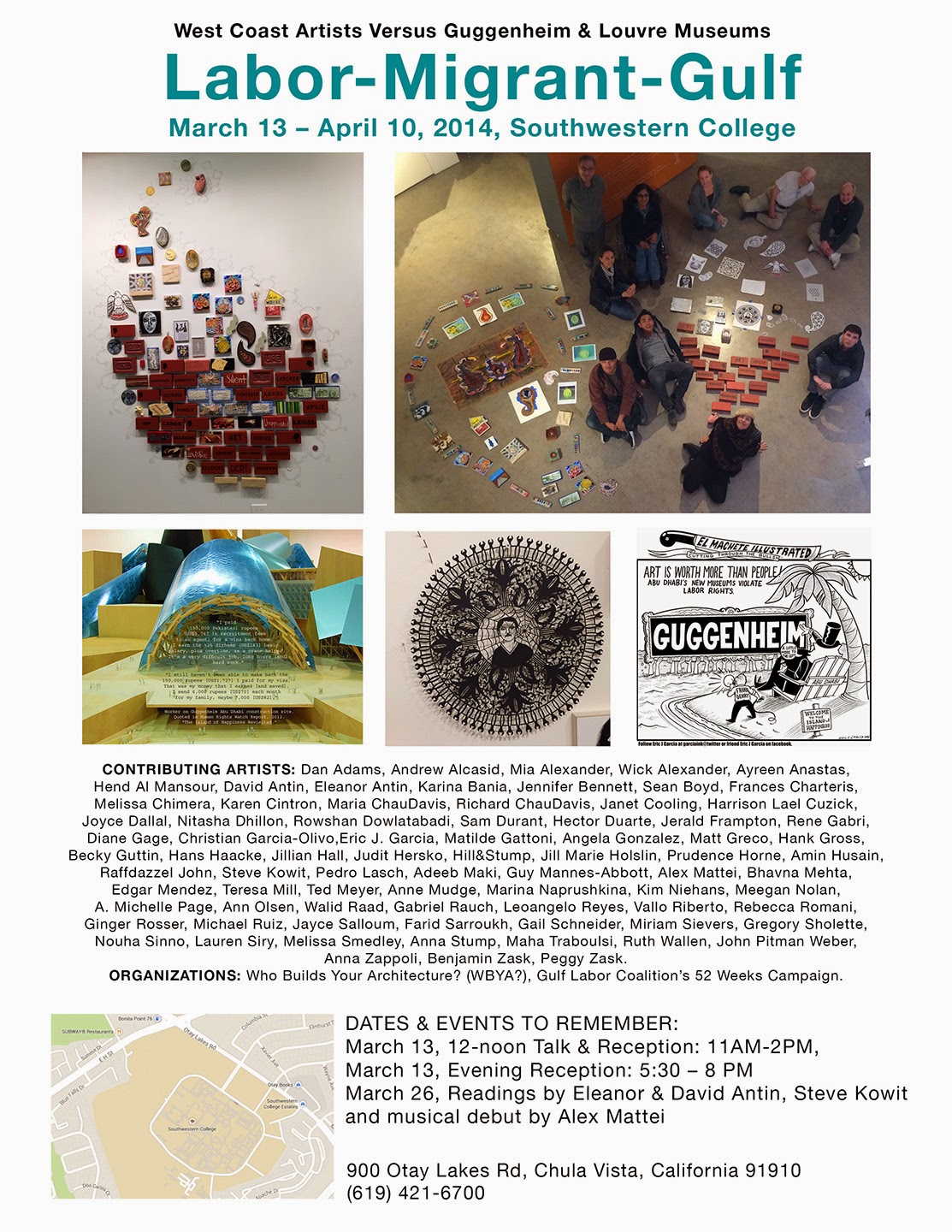 Labor-Migrant-Gulf is a group art exhibit coproduced by Southwestern College and Protea Gallery in San Diego. This exhibit coordinates with Gulf Labor Coalition based in New York City, whose commitment is to bring awareness to the migrant working poor in the Persian/Arabian Gulf and throughout the world.

Gulf Labor, based in New York City, is a coalition of artists and activists who have been working since 2011 to highlight the coercive recruitment and deplorable living and working conditions of migrant laborers in Abu Dhabi's Saadiyat Island (Island of Happiness). Their campaign focuses on the workers who are building the Guggenheim Abu Dhabi, Louvre Abu Dhabi, and the Sheikh Zayed National Museum (in collaboration with the British Museum).

52 Weeks is a one-year campaign that started in October 2013. Artists, writers, and activists from different cities and countries were invited to contribute a work, a text, or action each week that relates to or highlights the unjust living and working conditions of migrant laborers building cultural institutions in Abu Dhabi. The group exhibit, based in Southern California - San Diego County, "Labor Migrant Gulf" is part of the “52 Weeks” campaign assigned to weeks 21 – 25. To learn more visit: http://www.gulflabor.org.

Doris Bittar, curator for the show, writes that Labor-Migrant-Gulf explores migrant workers' struggles throughout the world with pointed emphasis on workers from Central and Southeast Asia who work in the Arabian/Persian Gulf, Mexican workers on the US-Mexican border, and California’s migrant history. The exhibit at Southwestern College in Southern California joins artists from around the world to bring awareness to the human struggles of the world’s poorest laborers. A sub-theme is the artist’s identification with migrant laborers. Perhaps the artist may be one or two rungs above the world’s poorest labor pools. The exhibit was organized in two parts: One part is a traditional group exhibit of about a dozen artists. The other part is collective wall of pieces made up of art from about 50 artists to form the shape of large boteh or paisley designs. The boteh/paisley is a significant ornamental design that has religious, historical, colonial, counter culture, and labor meaning and inferences. With the boteh/paisley designs, the artists honor Asian migrants that precipitated and inspired this art exhibit.

G. Pasha Turley's I Like to Tell Stories Series

G. Pasha Turley writes that her artwork has mainly been concerned with exploring the human condition and social issues. In this sequence of black and white photographs, she used infrared film to photograph the images and titled the series, “I LIKE TO TELL STORIES….” 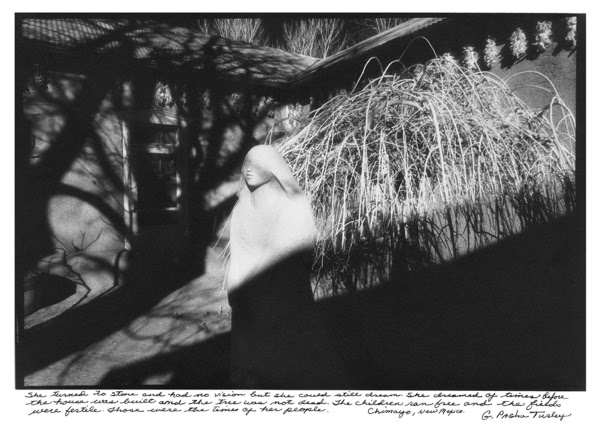 Because the film records the infrared rays rather than normal ambient light, the photographs appear ethereal, dreamlike, and unreal. After developing the infrared film, they were scanned digitally, enhanced, and altered in Photoshop. The changed images did not reflect Turley's original intention. They seemed to have their own story to tell. 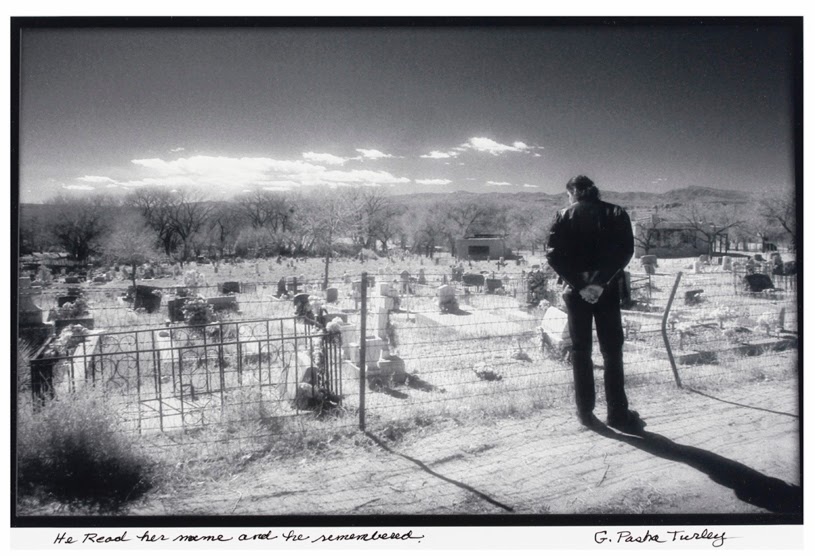 He read her name and he remembered, Infrared photograph, 33”w x 27”h

She waited and looked and listened and when the images spoke to her, she wrote their stories.
Posted by FIG at 9:39 PM 0 comments

Irene Abraham will be showing In and Out (below) 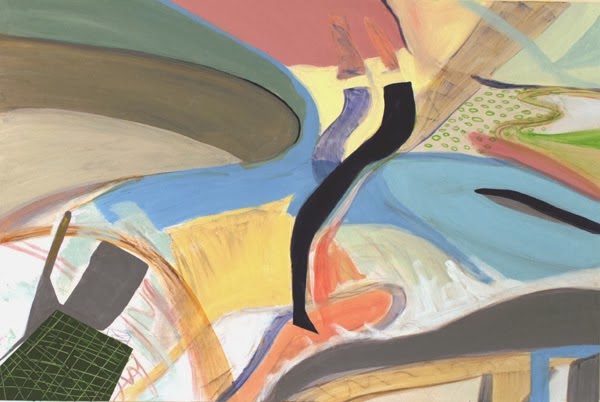